The DIO port is a VHDCI 68 pin connector as introduced by the SPI-3 document of the SCSI-3 specification. It is a female connector that requires a 32 mm wide male connector. The DIO port features 32 bits that can be configured byte-wise as inputs or outputs.

The table below shows the mapping between DIO pins and input/output signals available when using the DIO connector to output qubit state measurement results. The direction is as seen from the UHFQA instrument. In order to use these signals, the Digital I/O Mode and Drive setting have to be chosen accordingly. Please refer to DIO Tab for further documentation.

The figure below shows the architecture of the DIO input/output. The DIO port features 32 bits that can be configured byte-wise as inputs or outputs by means of a drive signal. The digital output data is latched synchronously with the falling edge of the internal clock, which is running at 56.25 MHz. The internal sampling clock is available at the DOL pin of the DIO connector. Digital input data can either be sampled by the internal clock or by an external clock provided through the CLKI pin. A decimated version of the input clock is used to sample the input data. The Decimation unit counts the clocks to decimation and then latches the input data. The default decimation is 5625000, corresponding to a digital input sampling rate of 1 sample per second.

When operating the Zurich Instruments HDAWG and UHFQA in a multi-instrument setup for quantum computing, the DIO interface can be used to communicate data within the system. There are two modes supported:

In the first case, the DIO interface is used to embed the UHFQA into the QCCS by a connection to a HDAWG. This case is described in the PQSC User Manual. The second mode makes use of the DIOLink interface protocol documented in the following.

The DIOLink provides a digital interface to Zurich Instruments HDAWG and UHFQA instruments. It enables the user to trigger the AWGs in the respective instruments using a digital codeword sent from a central control unit. The codeword may be used for playing back a waveform from a table with low latency, triggering a qubit measurement, etc. In case of the UHFQA instrument, the interface may also be used for communicating the results of a measurement back to the controlling unit.

The following figure illustrates how such a measurement setup could be constructed. A host PC is responsible for controlling all the instruments in the setup. The instruments are synchronized by a shared 10 MHz reference clock. A central control unit controls the operation of the HDAWG and UHFQA instruments during experiments using the DIOLink interface. For the HDAWG, the DIOLink is unidirectional as there is rarely a need to communicate information back to the central control unit. In contrast, the DIOLink of the UHFQA is bidirectional such that measurement results can be reported back and acted upon. 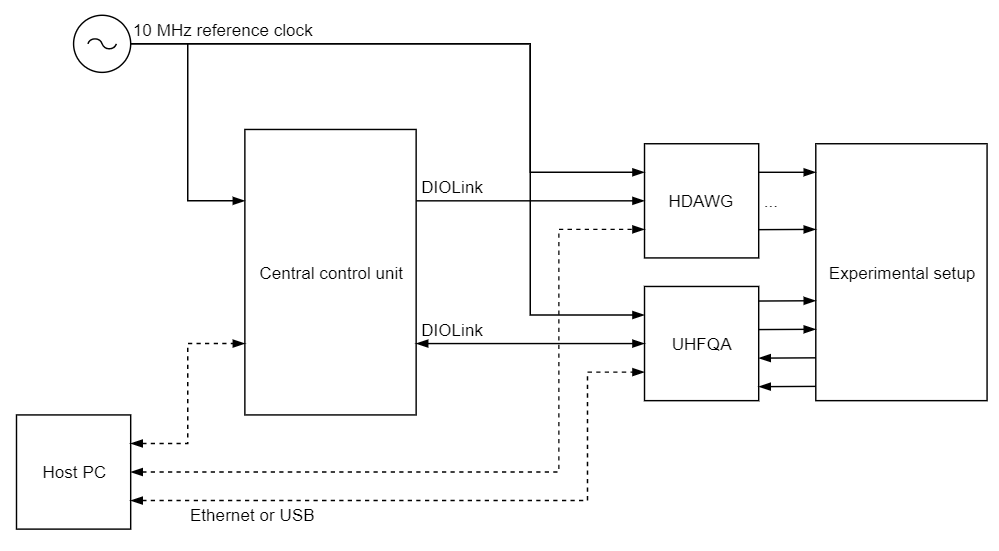 The DIOLink interface makes use of the signals shown in the following table. The signals are all transmitted from the sender to the receiver of the link. The length of the codeword varies between instruments and can at least to some extend be configured by the user.

The maximum rate at which codewords can be transmitted to the instruments is 50 MHz. It is allowed to use a lower rate than 50 MHz, but the rate must always be an integer division of 50 MHz. Therefore, 25 MHz and 12.5 MHz would be supported, but 40 MHz would not. The following figure shows a timing diagram of the signaling protocol on the interface.

The timing on the interface is described in more detail in the following table.

The DIOLink signal assignment on the DIO connector to an HDAWG instrument is freely configurable by the user. This is done using the corresponding settings in the AWG Sequencer tab in the LabOne User Interface. The DIO pin for the STROBE and VALID signals are selected using Strobe Index and Valid Index settings. The codeword is specified using the Codeword Mask and Codeword Shift settings. These two settings allow the user to select any range up to 10 bits wide to use as an index for playing back waveforms from a table using the playWaveDIO sequencer instruction.

In case of the UHFQA, the assignment of DIOLink signals to DIO pins is static and specified in the following table for those pins that communicate data from the UHFQA to the central control unit. As such, the direction is as seen from the UHFQA instrument.

The ZCtrl port serves to power and communicate to external equipments, such as pre-amplifiers: the port provides a floating power supply with ±14.5 V and 100 mA per port. After Instrument power-on, the port is not active and must be switched on in order to be used. Two activation methods are supported:

Th ZCtrl port can be connected with an RJ45 connector, therefore non-crossed Ethernet cables can be used for convenient interfacing.

Figure 4. The pinout of the ZCtrl port

Many of the parameters mentioned in Analog Interface Specifications are valid without specific conditions. Other parameters instead are typical specifications, because they depend on several parameters, such as the input range setting, the input termination and/or the frequency. This section completes the previous chapters with detailed performance diagrams in order to support the validation of applications.

button of the Auto Calibration section in the Device tab of the user interface.

The user can disable the calibration procedure completely if necessary. This can be done by changing the Enable button of the Auto Calibration in the Device tab. If this flag is disabled, no calibration is executed after warm-up time.

The default self calibration procedure can be divided into three different states, which are also indicated by the CAL flag in the footer of the user interface. The CAL flag can be either yellow, gray/off, or red.