Connecting to the Instrument

The software of Zurich Instruments equipment is server-based. The servers and other software components are organized in layers as shown in Figure 1.

The architecture with one central Data Server allows multiple clients to access a device with synchronized settings. The following sections explain the different layers and their functionality in more detail.

The LabOne Data Server program is a dedicated server that is in charge of all communication to and from the device. The Data Server can control a single or also multiple instruments. It will distribute the measurement data from the instrument to all the clients that subscribe to it. It also ensures that settings changed by one client are communicated to other clients. The device settings are therefore synchronized on all clients. On a PC, only a single instance of a LabOne Data Server should be running.

The LabOne Web Server is an application dedicated to serving up the web pages that constitute the LabOne user interface. The user interface can be opened with any device with a web browser. Since it is touch enabled, it is possible to work with the LabOne User Interface on a mobile device - like a tablet. The LabOne Web Server supports multiple clients simultaneously. This means that more than one session can be used to view data and to manipulate the instrument. A session could be running in a browser on the PC on which the LabOne software is installed. It could equally well be running in a browser on a remote machine.

With a LabOne Web Server running and accessing an instrument, a new session can be opened by typing in a network address and port number in a browser address bar.

The most recent versions of the most popular browsers are supported: Chrome, Firefox, Edge, Safari and Opera.

The instrument can also be controlled via the application program interfaces (APIs) provided by Zurich Instruments. APIs are provided in the form of DLLs for the following programming environments:

The instrument can therefore be controlled by an external program, and the resulting data can be processed there. The device can be concurrently accessed via one or more of the APIs and via the user interface. This enables easy integration into larger laboratory setups. See the LabOne Programming Manual for further information. Using the APIs, the user has access to the same functionality that is available in the LabOne User Interface.

can be found under the Windows 10 Start Menu (Under Windows 7 and 8, the LabOne User Interface start-up link can be found in Start Menu → all programs / all apps → Zurich Instruments LabOne). As shown in Figure 2, click on Start Menu → Zurich Instruments LabOne. This will open the User Interface in a new tab in your default web browser and start the LabOne Data Server and LabOne Web Server programs in the background. 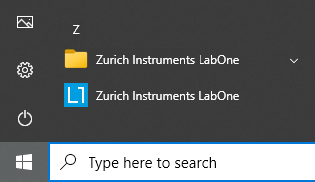 Figure 2. Link to the LabOne User Interface in the Windows 10 Start Menu

After starting LabOne, the Device Connection dialog Device Connection dialog is shown to select the device for the session. The term "session" is used for an active connection between the user interface and the device. Such a session is defined by device settings and user interface settings. Several sessions can be started in parallel. The sessions run on a shared LabOne Web Server.

The Device Connection dialog opens in the Basic view by default. In this view, all devices that are available for connection are represented by an icon with serial number and status information. If required, a button appears on the icon to perform a firmware upgrade. Otherwise, the device can be connected by a double click on the icon, or a click on the

button at the bottom right of the dialog.

In some cases it’s useful to switch to the Advanced view of the Device Connection dialog by clicking on the "Advanced" button. The Advanced view offers the possibility to select custom device and UI settings for the new session and gives further connectivity options that are particularly useful for multi-instrument setups. 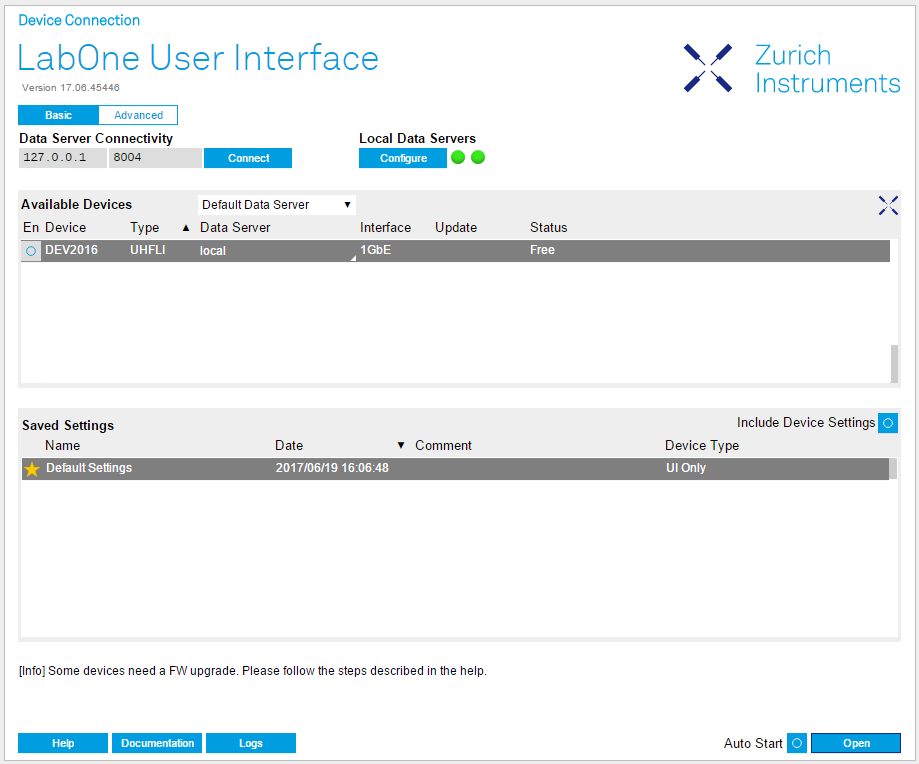 The following sections describe the functionality of the Device Connection dialog in detail.

The Device Connection dialog represents a Web Server. However, on start-up the Web Server is not yet connected to a LabOne Data Server. With the Connect/Disconnect button the connection to a Data Server can be opened and closed.

Settings files can contain both UI and device settings. UI settings control the structure of the LabOne User Interface, e.g. the position and ordering of opened tabs. Device settings specify the set-up of a device. The device settings persist on the device until the next power cycle or until overwritten by loading another settings file.

The columns are described in Table 2. The table rows can be sorted by clicking on the column header that should be sorted. The default sorting is by time. Therefore, the most recent settings are found on top. Sorting by the favorite marker or setting file name may be useful as well.

Certain file names have the prefix "last_session_". Such files are created automatically by the LabOne Web Server when a session is terminated either explicitly by the user, or under critical error conditions, and save the current UI and device settings. The prefix is prepended to the name of the most recently used settings file. This allows any unsaved changes to be recovered upon starting a new session.

If a user loads such a last session settings file the "last_session_" prefix will be cut away from the file name. Otherwise, there is a risk that an auto-save will overwrite a setting which was saved explicitly by the user.

When LabOne is started, a tray icon appears by default in the bottom right corner of the screen, as shown in the figure below. By right-clicking on the icon, a new web server session can be opened quickly, or the LabOne Web and Data Servers can be stopped by clicking on Exit. Double-clicking the icon also opens a new web server session, which is useful when setting up a connection to multiple instruments, for example.

In this case the browser is no longer able to connect to the LabOne Web Server. This can happen if the Web Server and Data Server run on different PCs and a network connection is interrupted. As long as the Web Server is running and the session did not yet time out, it is possible to just attach to the existing session and continue. Thus, within about 15 seconds it is possible with Retry to recover the old session connection. The Reload button opens the Device Connection dialog shown in Device Connection dialog. The figure below shows an example of the Connection Lost dialog.

If a session error cannot be handled, the LabOne Web Server will restart to show a new Device Connection dialog as shown in Device Connection dialog. During the restart a window is displayed indicating that the LabOne User Interface will reload. If reloading does not happen the same effect can be triggered by pressing F5 on the keyboard. The figure below shows an example of this dialog.

To control the device over USB, connect the instrument with the supplied USB cable to the PC on which the LabOne Software is installed. The USB driver needed for controlling the device is included in the LabOne Installer package. Ensure that the device uses the latest firmware. The software will automatically use the USB interface for controlling the device if available. If the USB connection is not available, the 1GbE connection may be selected. It is possible to enforce or exclude a specific interface connection.

If a device is attached via a USB cable, a connection will be established automatically by the Data Server. This is the default behavior.

This is achieved by right clicking the LabOne Data Server shortcut in the Start menu, selecting "Properties" and adding the text to the Target field as shown in Figure 7. 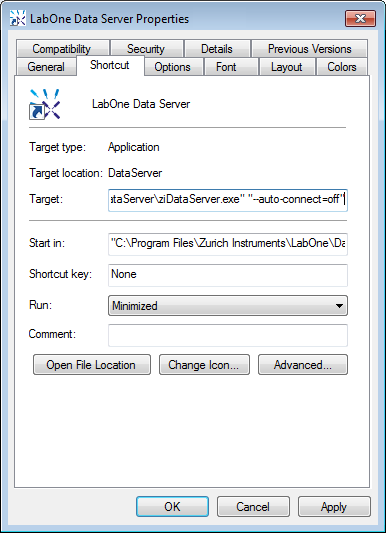 There are three methods for connecting to the device via 1GbE:

Multicast DHCP is the simplest and preferred connection method. Other connection methods can become necessary when using network configurations that conflict with local policies. This particularly concerns the enabling of Jumbo frames, which is an essential setting for good performance when using high data transfer rates.

If the network configuration does not support multicast, or if the host computer has other network cards installed, it is necessary to use a static IP setup as described below. The UHF Instrument is configured to accept the IP address from the DHCP server, or to fall back to the IP address 192.168.1.10 if it does not get the address from the DHCP server.

Setting up a point-to-point (P2P) network consisting only of the host computer and the UHF Instrument avoids problems related to special network policies. Since it is nonetheless necessary to stay connected to the internet, it is recommended to install two network cards in the computer, one of which is used for network connectivity (e.g. internet), the other can be used for connecting to the Instrument. Notebooks can generally profit from wireless LAN for internet connection. 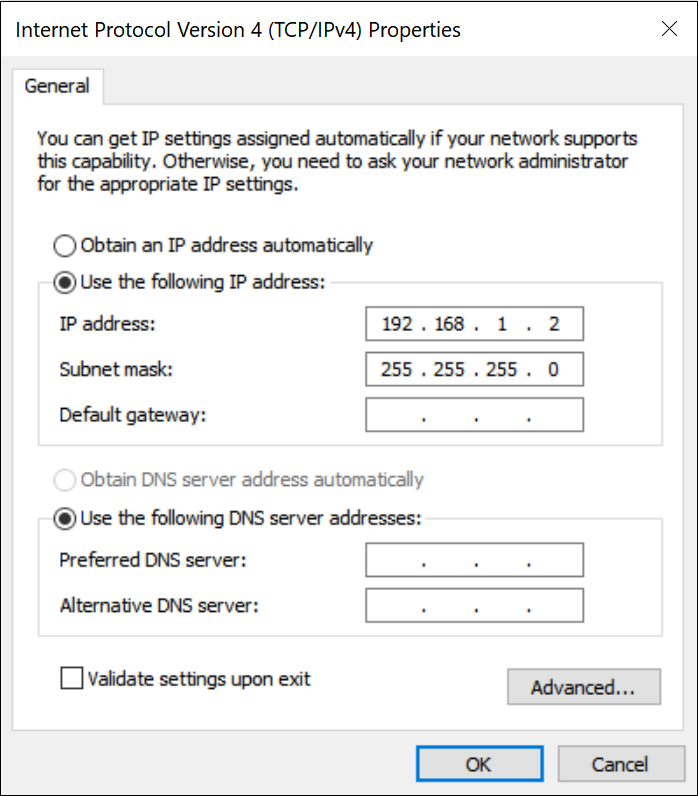 Using a static IP address for the host computer is necessary to set up a point-to-point network. On top of that, a static device IP configuration can be necessary in the rare cases in which the network card does not support multicast.

Especially when working at high data transfer rates, it’s recommended to use one of the network card models that have been tested by Zurich Instruments. In comparison, some older network cards either don’t support performance features such as receive side scaling or jumbo packets, or have performance limitations that can lead to sample loss. In addition to the choice of the network card, a powerful processor on the host PC is essential for preventing data loss. 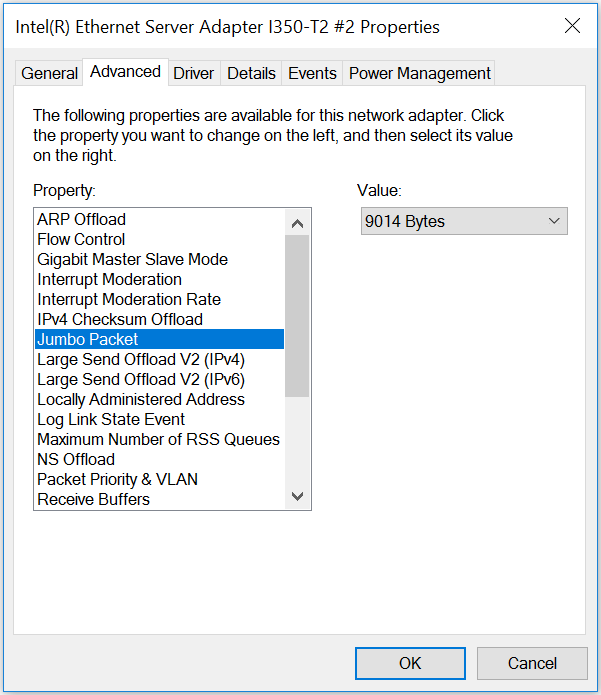 Figure 12. Network card properties dialog for the I350-T2 model. The dialog is accessible via the Windows Device Manager.